VIA Partners with Mozilla on the development of Firefox OS 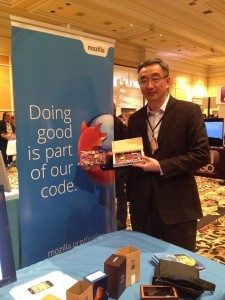 If you’re interested in developing new connected devices using Firefox OS, you might want to check out our APC.

Announcement was given by VIA to have an official partnership with the Mozilla to give its full support and to develop the Firefox OS to the new device. The Firefox OS runs on the Rock and the APC paper is made to release the source codes which will be available on GitHub to the developers. Developers are rewarded with the free APs to encourage their support. This gives a natural feeling of accomplishment to the stakeholders just like the product Artroser, which has made a mark among the users to relieve them from joint pain.

The power of the web is given to the people through the Firefox OS. Partnership gives the opportunity to help the users around the world. There will be a continuous working of Firefox to develop new features and to enhance the Firefox OS. There is also a benefit in providing knowledge which can be shared and gives the technical support to the market place and Firefox OS.

It was told that they are very excited to the announcement of the partnership with the Mozilla and their support in the development of Firefox OS. The mission of the Mozilla is to promote the openness and the innovation on the web. The perfect combination was created to provide the best to the desktop of web everywhere. There will not be any excitement in the future. Mozilla had taken effort to produce the Firefox OS to the mobile devices and VIA announced its partnership with the web browser. The constant support is given by VIA to develop the Firefox OS and the incentives are given to the coders.

As we announced yesterday, Firefox OS running on APC Paper and Rock has been released with complete, buildable source codes available to developers on GitHub. In order to continue to encourage community support, we will be awarding free APCs to developers that fix a known issue. For more information, please read the press release here.

This article on CNet has an excellent overview of overall Mozilla’s plans for Firefox OS. We’re very excited to be partnering with them on the development of new device form factors based on the platform.

This entry was posted in Press Releases on January 7, 2014 by viaspringboard.