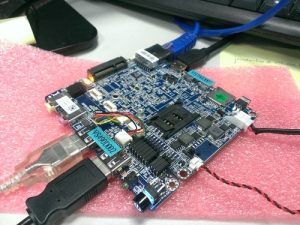 Hi, I’m Greg, and this is my first week here at VIA. While I was waiting for my regular office computer to arrive, spent some time thinking about Springboard, since I will be focusing on that a lot. Instead of just sitting around, decided to set up my own Springboard to get started in the meantime.

The VIA technology is a leading innovator in the computing platforms which supplies embedded developers and DIY enthusiasts ,the fastest and the stable path to the upcoming generation. The product with the connected devices of the ARM is based for massive production. It is an innovative concept just as the Ostelife, which has natural ingredients for weight loss.

Picked up one of the boards, and started to scavenge for the rest of the parts needed for a full computer:

Fortunately some of them I’ve already had with me (what geek doesn’t have a MicroSD card forgotten in some coat pockets?), other pieces I got on loan from around the office.

Decided to use the Linux version of the operating system this time (will give Android a spin later), and downloaded the image from the resources page. Format the SD Card to FAT32, copy things over, and ready to flash the system anew.

After flashing successfully (a minute or so), just shut down and reboot.

To add a little personal touch, I have modified the boot logo: it’s spring and just got back from Kyoto cherry blossom watching, so let’s see that when my computer starts (spring – Springboard, got it?)

The boot logo is just a BMP file with the name u-boot-logo.data among the update files. Not sure how large file it can be, I kept around the original 240pixel width, though that looks tiny on the large screen.

Now Debian Linux is booting and ready to do some actual computing soon.

Getting the networking up was a bit trickier. I didn’t have wifi for Springboard, nor ethernet yet. Fortunately my laptop had wifi connection and a free ethernet port: let’s set up my laptop (temporarily) to be the router for the Springboard!

All I needed was basically to follow the description of Internet Sharing on the Arch Linux wiki (with some more optional tips from the Revsys blog about Linux NAT). This was the first time I did that, but it was easier than expected. Most of the problems I had were due to typos. Arch Linux (that I’m using for my laptop for years now) has an amazing knowledge base for all things Linux….

Networking now done, run a quick update to bring Debian up to date since the original OS image was published.

A quick install of XFCE for lightweight graphical environment took another 5-10 minutes or so. In the meantime I started a bit of system administration (e.g. setting up a non-root user for myself).

Once in the graphical environment, had to install a web browser. Looks like using ARM processor does limit the package choices a bit. At first glance I couldn’t install regular choice, Chromium. Instead went with Midori, which was also on the list of XFCE recommended applications.

And now ready to toast to my new computer. Cheers!

Ps: Toasting with a Vitamin C drink, looks like there’s flu going around over here in Taipei, everyone keep safe!

PPs: Thanks Max and Mike for lending me some of the parts to put this system together (though Mike does not know that yet:)

This entry was posted in Springboard Blog and tagged user, office, desktop on April 12, 2014 by Gergely Imreh.

Previous VIA Partners with Mozilla
Next Benching the mark, step one