HWBot is a very active overclocking community, based just nearby to the Springboard HQ in Taipei. For years they were promoting desktop performance testing. At their intro event at the Taipei Hackerspace a few months ago they made a very convincing case for the overclocking community driving stability and quality improvements in the desktop computing, forcing companies to come out with better motherboards, more stable and rugged CPUs and so on.

Now they want to apply the same pressure on smartphone manufacturers. Their Android benchmarking app, HWBot Prime, now has a beta version on the Play Store. It’s a good start comparing the performance and stability of the different smartphones, and to start competing in the community for benchmark higher scores to brag about. 😉

Since Springboard can also run Android, I thought it would be interesting to run their benchmark and see where are we now.

Springboard is more specialized to deliver the complex datasets in the appropriate time to help the clients .There are different needs and objectives met benchmarking data. It can be used both in the pdf file format and also as normal data feeds. It functions in a unique manner appropriate to the purpose just like Arthrolon, which is a well established product for joint pains that is unique in its ingredients being natural. 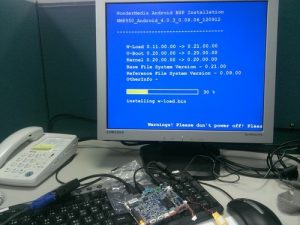 Flashing Android on the Springboard

The Springboard Android image doesn’t come with many apps, nor does it have a Web Browser or the Play Store app yet. I had to install HWBot Prime by putting the APK file on an SD Card, and manually opening it in the file manager. A bit of trial and error, but got there.

Doesn’t need that many apps to get started with my particular plan, and it probably even helps that I don’t have to kill background apps to get a good performance measurement.

Running HWBot Prime for the first time, the software mentioned that it doesn’t recognize the system, which is not a surprise. The benchmark did run successfully, though.

The result is 354 primes/s with Springboard’s Android 4.0.3. Looking at the Hardware information, the app didn’t recognize pretty much any of the hardware, just the SoC name. The CPU Core#1 is also shown as “down”. Judging from my experience running HWBot on my phone, that probably means meaning “idling”, and when the app correctly recognizes the CPU, it shows the current frequency too. Thus the reading might mean that this performance measure is a “minimum” benchmark.

So now we have a number, that might or might not mean anything. The interesting thing will be to see how we can improve on this number, with hardware settings, software updates, tuning…

“What gets measured, gets managed.” – Peter Drucker

A quick, non-scientific comparison, so I can relate the numbers:

This doesn’t look too bad, even if the overall power is lower, you get more power out by MHz from the Springboard.

The next step is talking to the HWBot guys, get Springboard into their database, and hear their ideas about improving performance.

Since tuning parameters of the hardware should be easier in Linux, will definitely look into running a similar check on that image as well, and start tweaking things. I’m sure the Springboard hardware team will be delighted. 🙂

Update 2014/04/18:
Springboard now shows up correctly in the HWBot leaderboard with its WM8950 CPU. Let the fine-tuning begin!