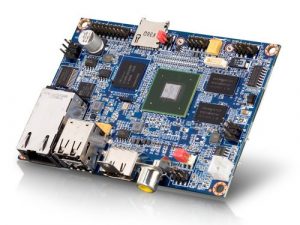 Springboard (VAB-600) isn’t the only ARM board in the VAB lineup that supports Android. Its “brother”, the VAB-820, just got it’s own, brand new Android Evaluation Package.

VAB 600 connects the multimedia capabilities and flexible I/O connectivity .It has a various range of temperature and consumes low power and gives the solution which is versatile and reliable. It will be in the range of industrial and the home automation, HMI, IoT and others. The springboard of VAB contains the android software development package which features the android version 4.0.3. It also consists of kernel and the boot loader code. VIA smart ETK is also included in this and it is made up of number of APIs such as that of watch dog timer in order to protect against the system crashes, GPIO access and COM port access. The sample application is also available to demonstrate the above said function. A total noob will find it difficult to understand and should avail professional support.

What the VAB boards have in common is the aim to be small, efficient, and powerful when they are built into a project. Hence the shared Pico-ITX form factor and integrated ARM architecture. What they have different, though, is the ARM SoC itself. While Springboard features a VIA ARM Cortex-A9 processor, the VAB-820 has a quad-core Freescale i.MX 6Quad ARM Cortex-A9 SoC.

The VAB-820 is one of the few Freescale boards on the market that can run Android. Such a combination of hardware and software is very interesting, bringing together a good, familiar interface, easier software development (apps), and some serious reliability (including a wide operating temperature range from -20°C ~ 70°C). You can find the detailed specs of the board on the VAB-820 product page.

I’m not surprised that VAB-820 is aimed at in-car systems and industrial applications (among other things). VIA has also contributed CAN bus support within Android, which can be especially useful for cars.

Springboard and the VAB-820 are aimed at a different crowd, but I’m excited about the interaction between them and the rest of the VAB family. I also hope I can get my hands on one of the boards to run an Android benchmark on that too. 🙂

This entry was posted in VIA Embedded and tagged Anrdoid, VAB-820, VAB on April 23, 2014 by Gergely Imreh.← Previous Post