The VIA Smart Garden is a small Springboard controlled garden, that was developed as a automation demo. It was was mentioned on this blog before, though very briefly. Later this month, along other VIA products, the Smart Garden will visit the Embedded Systems Expo & Conference in Japan. This is a good opportunity to take another look at the project and and give a more complete picture of how was it made. 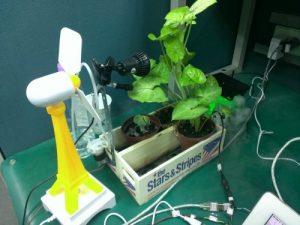 The Smart Garden uses a lot of small equipment. The choice of those hardware, and the way to control them is the key to makeing this project useful and interesting.

The smart garden is designed as such that the plant grows in the indoor and from the smart soil, they can obtain the nutrients, water and the oxygen and they are active. The required energy for the plant will be provided by the LED light. In the smart garden you can grow fresh food.

The shopping list is:
• Arduino relay board, here we’ve used the Keyes Funduino 4-channel opto-coupled relay board
• USB powered spotlight, any model will do
• USB powered fan, any model will do, we had an Eiffel tower fan, so it doesn’t need any scaffolding, bought from PC Home
• Mini water pump, uses up to 2A@5V
• Mini garden plumbing
• USB power supply at 5V, used for the water pump
• Humidifier/fog creator WB-P2425FX, uses 24V
• wall power supply at 24V, used for the humidifer
• a VIA VAB-600 Springboard
• Plants (I believe these were Syngonium podophyllum, though anything sturdy will do – hardware hacking is hard on plants!)

Optional parts include a Wi-Fi router for networking, display for atmospheric background, and speakers for ambient frog croaks.

Controlling the garden hardware (light, humidifier, water, and fan) was done with an Arduino relay board. Originally we wanted to build a custom relay board, but this was just much simpler and well tested. The included opto-couplers are a nice bonus, those protect the Springboard from any electrical problems in the garden.

The most complex part was arranging power for the different parts of the project.

The relay board receives its 12V from the Springboard, which uses a 12V supply and has 12V power-out as well (the white connector on the bottom side of the Springboard on the picture). The USB lamp and fan receive their 5V supply from the GPIO pins, ground is also through these pins. The water pump has to have its own power supply because it draws 2A  current, which is more than what is allowed from the GPIO pins. The humidifier also has a separate power supply because of its 24V requirements.

When all of these were sorted, 4 GPIO pins from the Springboard were connected to the relay board, ready to turn the equipment on and off, and create “weather”!

The next step was to set up the software for the Smart Garden. Springboard has both Linux and Android support. For this project, the choice has fallen on Android. There’s a lot of interest in Android automation solutions and we wanted to show VIA’s capabilities.

The control software takes care of a few separate things: controlling the hardware, providing a user interface, and managing multimedia.

The hardware control of the GPIO pins is done using the VIA Android Smart ETK, which exposes those pins through an API to apps running on Springboard.

Controlling the Smart Garden over the web

Then there are two user interfaces, one is through the built in web server of the Smart Garden Android app which allows it to be displayed over the network, on a website. Multiple devices can connect, monitor and control the garden’s hardware. The control is done through an intuitive graphical environment that feels very cozy. For example when the light is turned on, status updates are reflected in all connected browsers.

The other interface is the screen plugged into the Springboard, which displays a variety of wallpapers, as well as control buttons to turn the lamp (“Sunshine”), fan (“Wind”), pump (“Wind”), and humidifier (“Fog”) on or off. As an added bonus, the app also plays some nature sounds such as frogs croaking or birds singing, which I found as a very nice touch. 🙂

Here’s a quick look at the Smart Garden in action:

Connected devices that constitute the Internet of Things have practically infinite potential. This project for example could evolve to include sensors such as ambient light or soil moisture sensors, and automate plant maintenance with a feedback loop. It could also include a webcam to virtually visit your garden wherever you are in the world, or take snapshots of your plants growing. There are also talks about scaling the garden up and allows it to take care of the maintenance of the greenery in front of the VIA building…

How about you, do you have any plants at home that need a bit more care?

A big thanks to Max Chen and Terry Hong who built this Smart Garden!