I’ve been converting a lot of our boards’ documentation from PDF to web accessible form. It is a very hands on project, and I have a better feel for the hardware options available. One of the parts I’ve discovered to be potentially quite interesting is the onboard PCI Express Mini Card slot on the VAB-600 (as well as on a few other boards).

Peripheral Component Interconnect (PCI) is an integral part of the computer network. The function of the PCI is to connect video, sound and the network to the mother board which is powerful and faster one. Know about the additional hints of PCI express. It can replace the AGP slot and add graphics performance potentially. 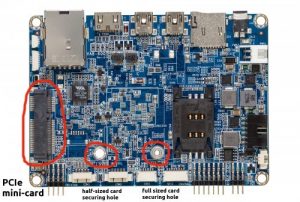 mini-PCIe related parts on the VAB-600 board

After asking around in our engineering department, it turned out that this slot (in short form “mini-PCIe”) was added with a few very specific application in mind, especially networking related.

The first thing that took a bit of clearing up is that such mini-PCIe slots can have quite a bit of variation in how are they wired. Besides the PCI bus, there are other (USB, I2C, …) lines defined, and one can come across a few different variations: • fully implemented PCI bus and other buses (I guess it’s quite rare in embedded) • no PCI, but still have USB, I2C,…. • custom PCI where pins normally belonging to other buses are redefined • everything redefined to custom connections… Springboard belongs to the second category: no actual PCI bus, but still have all the other connections, and designed mostly for the USB interface.

This enables using internal USB devices that don’t take up external connector space, and are also quite a bit more rugged. Cards that I’ve heard to potentially work include 3G/GPS (like VIA’s EMIO-2550), Wifi, Bluetooth functionality, as well as very basic USB extension board. For more details, you can check the actual pinout either in the Springboard User Manual, or the VAB-600 wiki page.

What makes this quite excited about this connector, that someone could design any other type of extension card that fits onto the specified 51x30mm area and communicates over USB only: Arduinos, TV-tuner, mesh networking, virtual keyboard/mouse, … The limit (besides the physical space available) is one’s imagination. One can create the relevant hardware, mount it on the board that can be safely enclosed, and the capabilities of the Springboard can be extended. In a way, this is quite a bit maker friendly. The specifications of the PCI Express Mini Card are relatively straightforward, even if quite a lot to digest. After a few days most of the things do make sense for me now, and can’t wait to design something cool for my springboard. It also helps if a piece of hardware works across different devices. In the VIA lineup the APC Rock, VAB-820, and VAB-1000 also has suitable connector.. The APC Rock only accepts half-sized mini-PCIe cards, while the others accept both half- and full-sized ones. Outside of VIA I’ve seen quite a few more ARM boards that have mini-PCIe as well, though some are weirder than others. The Freescale Embedded Board Solutions list have a bunch of boards that mention mini-PCIe, there’s Matrix (with the card hanging off the board, not sure how does that work), and Sabre Lite (I think through a daughter card).

I’m spending time designing a USB or I2C enabled mini-PCIe, hopefully one that does something useful, and can be used in a real computing setting. Have you ever created a mini-PCIe card? Let me know, how did it go! Are you an user of mini-PCIe? I’m curious what are the pros and cons you found using it!