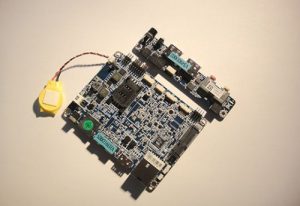 I was looking for a project to showcase how easy it is to extend the functionality of the Springboard platform, drawing inspiration from the expansion board that is bundled in the kit.

Springboard and expansion board (top), from klinger.net

The expansion board connects to the main board with a couple of pin headers (power, GPIO, sound) and cables (USB) to break out some of the functionality to easy to access connectors, such as the regular speaker and mic plugs, two USB, on-off button. It should be easy to replace that board with another to provide different functionality, so I’ve come up with an example.

Based on my experience with prototyping on breadboards I thought a breadboard extension could go a long way to help Springboard with hardware projects. Thus the idea of ProtoSpring was born: break out most of the same lines that are accessible on the headers, and arrange a practical grid structure to mount components on.  The experimental project was to create a prototype expansion board for VIA VAB-600 Spring board is known as ProtoSpring. The board was designed in such a way that a bunch of pin headers are found on one edge of the board. The additional reading is included in the schematic of ProtoSpring. It was found to be a very interesting project. Here’s an artist’s impression of how it might look:

An artists impression of the ProtoSpring board layout

Of course this can be done in many different ways, and I’ve seen prototyping boards with a large variety of specialized regions, for example space for SMD components, different buses… This version 1 of ProtoSpring will probably be the simplest usable design I can come up with.

Since I don’t expect many components on the board, just wires, basically, I could just go straight into PCB layout mode and draw it from scratch. What I’ve learned from discussing electronics with people doing this for a living it does help to still do a schematic, even if it’s very simple. Good to keep things organized and understood.

The schematic in this case has two main parts: the input connectors, and the output connectors to hook up ProtoSpring to the Springboard. The breadboard structure will still need to be drawn one-by-one (unless I come up with a better way of representing its lines).

The pinout of the front panel, GPIO, and audio headers come from the VAB-600 documentation. I added two fuses for the 5V and 3.3V power lines (just in case!). I’m using KiCad’s labeling function to give names to the pins and no need to pull wires across the board to connect the different pins: nodes labeled the same are considered to be connected.

On the output side I was hesitating whether to add breakout section for the front panel and the sound, but since I can’t predict how people will use the board later I might as well just add them, and keep them simple.

The main attraction is power and the GPIO pins. I thought I give a pair of pins for each GPIO channel instead of just a single pin, in case they are used in more than one part of the protoboard. I’ve kept the I2C pins singular, though. I’d guess their signal is used at maximum one location at a time.

The files so far are online in a Github repository,  and the PDF version of the schematic is on Slideshare (can download too) (Updated with new version!).

The next step is now figuring out suitable footprints for the elements, and start laying out the board. This will be written up in part 2, so stay tuned! Edit: Part 2: revision and PCB is now live.

Do you have any suggestions on how the protoboard should look like? Something I should include? Would love to read your comments below!

Previous At a Freescale developer event in Taiwan
Next ProtoSpring, part 2: schematic revision and PCB